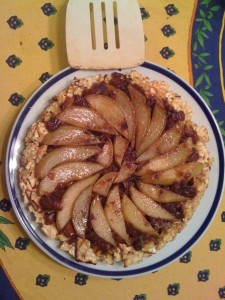 Gramma’s Matzoh Brei (the original recipe)
This is my grandmother’s original recipe so I’m leaving it here at the top of the page, but I do recommend you try my updated version of her recipe directly below it because it’s the one I actually use. The photo here on the right has raisins added.

Mon, 7 Jul 1997
“Hi there! Ok, here is the recipe I got from Gramma last Thanksgiving. Sorry not all the amounts are specific.
This is pretty much exactly what she told me about the dish. Use your imagination! More to follow soon I hope.” –Lau

Some quick notes about my updated version of the recipe:

My Matzoh Brei (Updated Recipe)
Apr 19, 2011
Because every good recipe deserves to be made better.

I’ve also made this with pears instead of apples, leftover seder charoseth, and other dried fruits like dates. Usually I make it with maple syrup rather than honey. And I’ve changed up the spices using a pumpkin pie combo. The spices and the fruits are very flexible and forgiving in quantities that make it easy to experiment. It really depends on your mood.