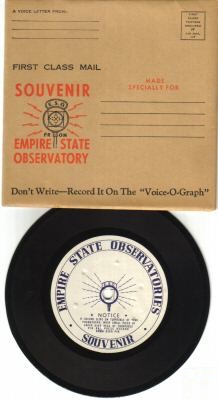 This is a Voice-o-Graph recording of my mother and my aunt singing “Shall We Dance,” from “The King and I” at the top of the Empire State Building sometime in the early 1950’s (but probably after 1952).

Mom says, “Nothing remains unbroadcast in this world. I think I was 6 or 5 at the time. There was a little recording booth in the Empire State Bldg. I don’t remember when “The King and I ” with Yul Brenner came out but it was probably the same year or shortly thereafter. “

Nina says, “How did you get hold of that 78? That was Mom and me–I don’t know how old we were–doing our best imitation of Gertrude Lawrence in a record-cutting booth at the Empire State Building. Maybe not even 1960. Yes, but we’re definitely imitating the original Broadway cast record, not the movie. You can hear those little slides in her voice.”